The building of the Ionian Bank is located in one of the city’s most central areas on the square in front of the main entrance of Saint Spyridon church. The Ionian Bank opened its first branch in this structure. It was the first bank to be established in Greece, and it was designed by Corfiot architect Ioannis Chornis. 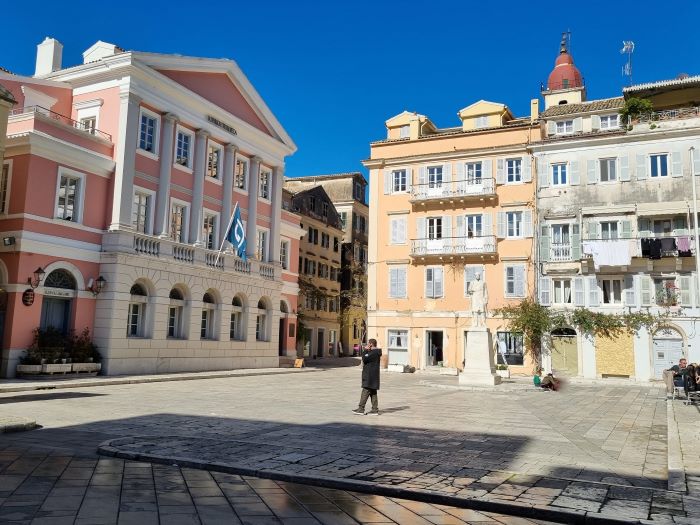 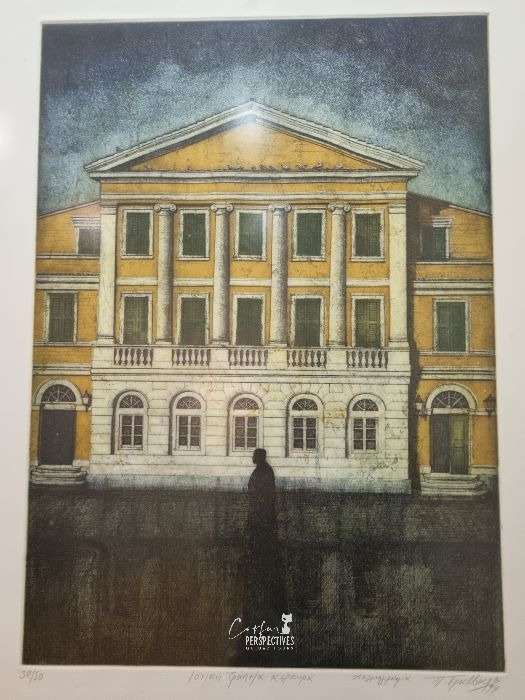 Ioannis Chronis was born in Corfu in 1799 and was one of the first architects of the Modern Greek state. He studied at Corfu, Venice, and Rome’s renowned San Lucas Academy. He served as the secretary of the Ionian Senate during his studies. On December 28, 1820, he wrote to Ioannis Kapodistrias, requesting his assistance in completing his studies in Italy. The Corfiot politician had created a Society in Vienna with the goal of financially supporting young Greeks studying at European institutions. Ioannis Kapodistrias indeed included Ioannis Chronis in the list of students who were sponsored. Ioannis Chronis was engaged as a political sub-engineer in the Ionian State upon his return to Corfu, and eventually became an assistant to the General Manager of Public Works. In Corfu, he left significant architectural work in the form of public structures and magnificent rural residences that are now considered historical monuments and works of art. 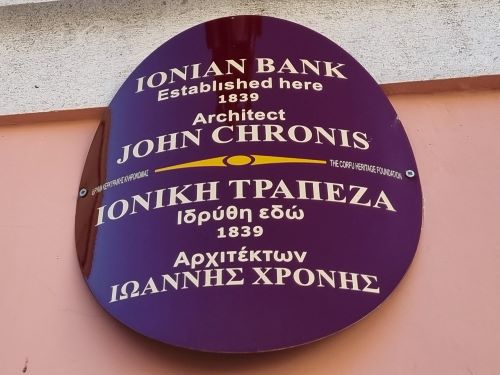 Using his talent and extensive knowledge, he substantially improved the physiognomy of today’s historical center from 1830 to 1875. Scholars believe that the time when Ioannis Chronis decorated the city with his magnificent buildings was the greatest in Corfiot architecture history. Later architects and engineers were highly affected by his work. Ioannis Chronis is responsible for many of the city’s architectural structures and attractions. The building of the Ionian Bank is one of the public buildings built by Ioannis Chronis.

The building of the Ionian Bank 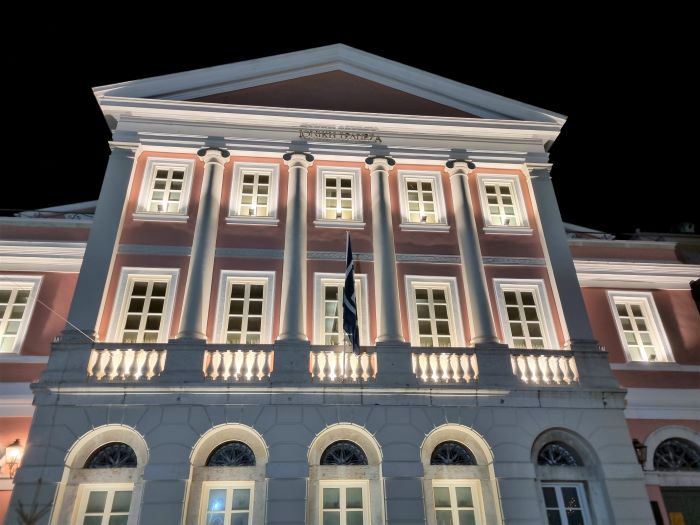 It is a two-story classical structure with features of English Palladianism that was built in 1846. The bank’s amenities were on the ground level, which includes carved brickwork at the base and arched apertures. The bank director’s home was on the first and second floors, that is decorated with Ionic columns, a temple-shaped pediment, and big rectangular apertures on the façade. The Ionian Bank building was the first structure in Greece to be fitted with electricity with its own local power generator housed in a chamber on the ground floor. The City of Corfu and its surroundings didn’t receive electric lights until 1931. 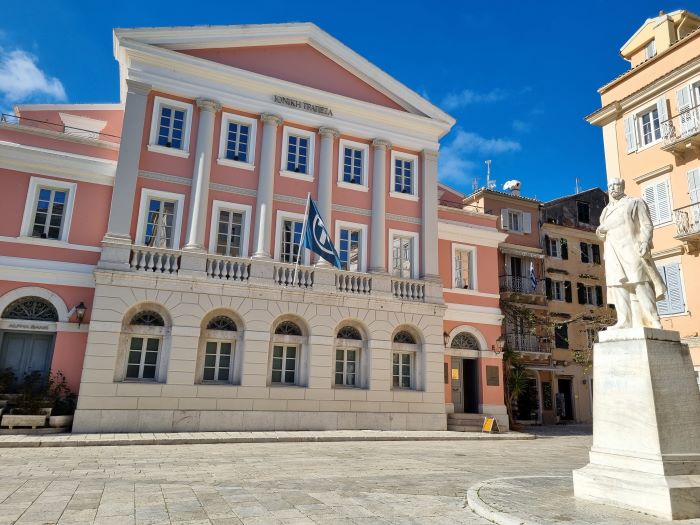 The Ionian Bank was Greece’s first bank, established on January 17, 1839, in London and mostly funded by British investors. Its original name was The Ionian State Bank, and it handled transactions between Great Britain and the Ionian Islands, which were a protectorate of Great Britain at the time. On March 2, 1840, the Bank’s first branch, which also served as the bank’s headquarters, opened in Corfu for the first time. This makes the Ionian Bank Greece’s oldest. 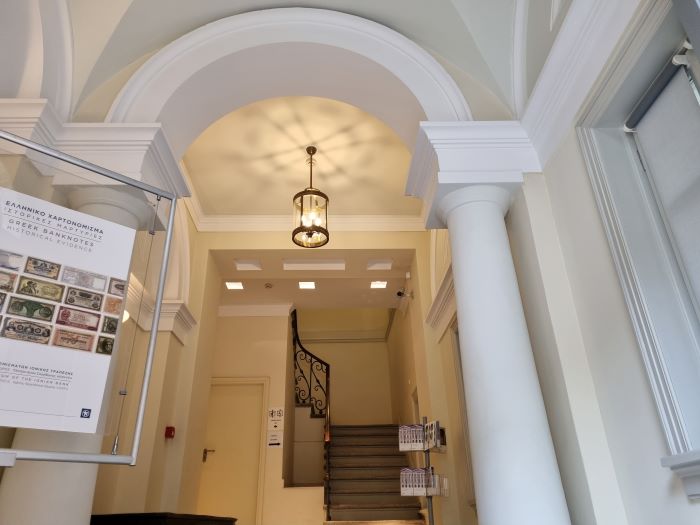 The bank was granted the exclusive right of issuing and circulating banknotes for the Ionian Islands for a period of 20 years. The Ionian Bank created a variety of banknotes, including Shillings and Pounds at first, and subsequently Ionian Drachmas once the Ionian Islands were incorporated into Greece. The bank quickly changed its name to Ionian Bank and began operating solely on the Ionian Islands, then expanded to Zakynthos and Kefalonia the following year. In 1845, a year after receiving a Royal Charter from the United Kingdom, the bank opened offices in Athens and Patras, as well as appointing special agents in Venice and Trieste. After the Ionian Islands joined Greece in 1864, the Ionian Bank became a Société Anonyme under a new charter, with the Greek government taking up the bank’s debt. The Ionian Bank also upgraded its offices in Athens and Patras to full branches that year. Following that, Ionian Bank expanded its operations throughout the rest of Greece. In 1873, the Athens office took over Corfu’s branch’s function office as Head Office. The bank had lost its legal monopoly in the Islands by 1880, but it had won an extension to its no longer exclusive authority to issue notes. The Ionian Bank renounced its Royal Charter in 1883 and became a limited liability business. The Ionian Bank kept its Greek charter until 1905, and in 1907, it opened branches in Alexandria, Egypt. 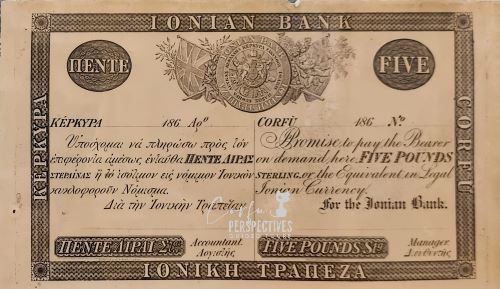 During World War I, Ionian Bank opened branches in Salonika, Syra, Chios, and Mitylene to service allied military interests in the Balkans. It lost its note-issuing power in 1920 and bought the Guaranty Trust Co. of New York’s Constantinople branch and potentially a sub-branch or agency in Smyrna two years later. Ionian Bank began its worldwide operation in 1924 by opening a representative office in New York, followed by one in Cyprus the following year. In 1928, it withdrew from New York, closing its business there, and from Constantinople the following year, selling its branch to Deutsche Bank. 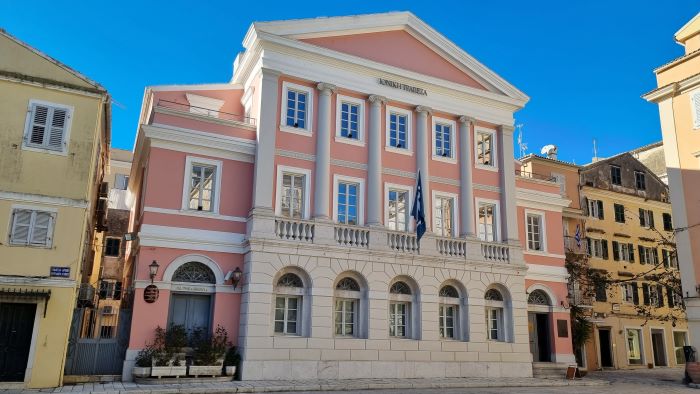 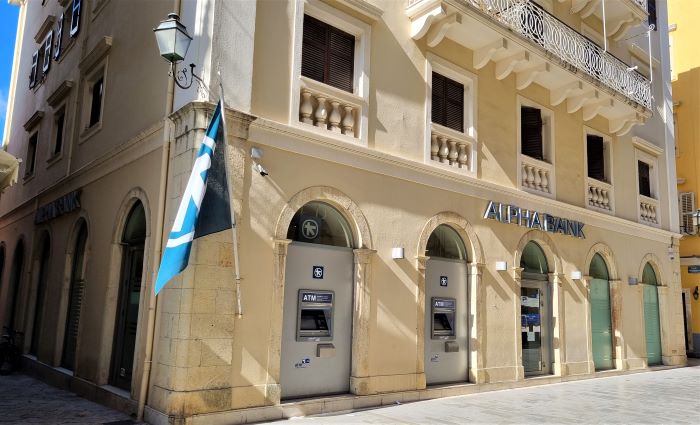 Alpha Bank was founded in Kalamata, Peloponnese, in 1879. It used to go by a different name, which changed multiple times throughout the years. Later, the Bank established a regional network of branches throughout the Southern Peloponnese with headquarters in Athens. It was the only bank of its size after World War II that was able to withstand the challenging conditions of the time and focus on the construction of a nationwide branch network. In 1999, Alpha Credit Bank – a name chosen in 1994 – purchased 51 percent of Ionian Bank’s shares, making it Greece’s largest privatization ever. The merger of the two financial companies was finalized the following year, and the new, expanded bank was called Alpha Bank in 2000.

The "Banknote Museum of the Ionian Bank/Alpha Bank, Corfu"

Since 1981, the Ionian Bank in Corfu has operated the “Banknote Museum of the Ionian Bank/Alpha Bank, Corfu” under the patronage of Alpha Bank on the first floor of the historic building. The Banknote Museum is one of a kind in Greece, and one of the world’s few and most fascinating museum. The Museum’s collection spans 180 years and includes the whole series of all paper money issued by the Greek State throughout its history, including banknotes, coin notes, and related artifacts. 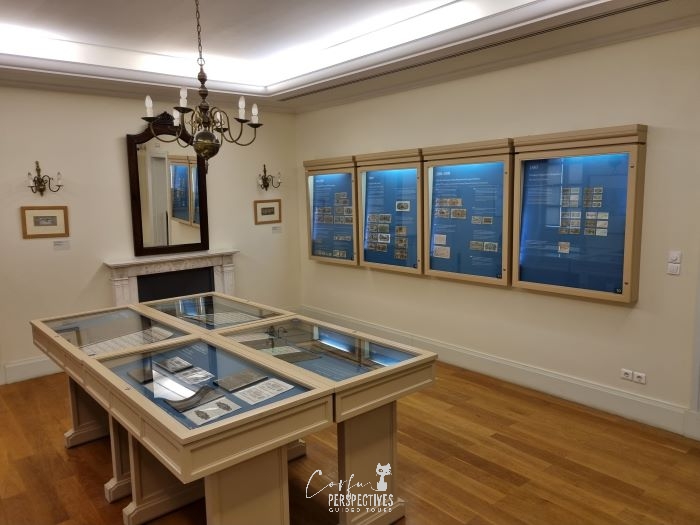 The three currencies that have circulated successively since the founding of the Greek state are the Phoenix, the Drachma, and the Euro. Major events in Greek history are depicted on a timeline and related to numismatic circulation in the Museum’s permanent display. The journey starts with piastre bond notes produced by the Provisional Government of Greece in 1822 and the phoenix banknote issued by Ioannis Kapodistrias in 1831 and ends with the last drachma banknotes, which were withdrawn in 2002 when the Euro was introduced.

The Phoenixes, the first paper money issued by the Greek State under the Corfiot Ioannis Kapodistrias administration, as well as all the paper money issued by the Bank of Greece, which is believed to be more than 2,000 items, occupy a particular place in the museum. Parochial paper money from the Turkish occupation era, as well as preparatory designs of the first Greek coin created by Corfiot artist Michael Axelos, are among the Banknote Museum’s rare artifacts. Apart from a large number of banknotes on display, there are also printing matrices, other bank papers, pictures, and thorough depictions of the procedures involved in the current banknote manufacturing process. The Banknote Museum is open to the public every day except Mondays from 9 a.m. to 3 p.m., and admission is free. 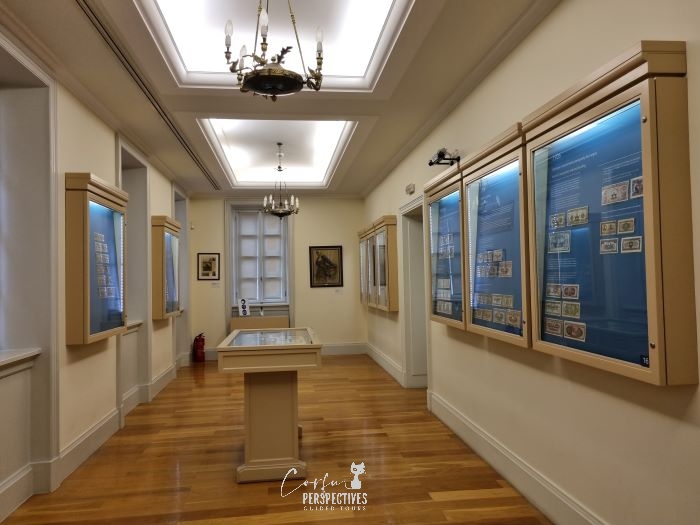 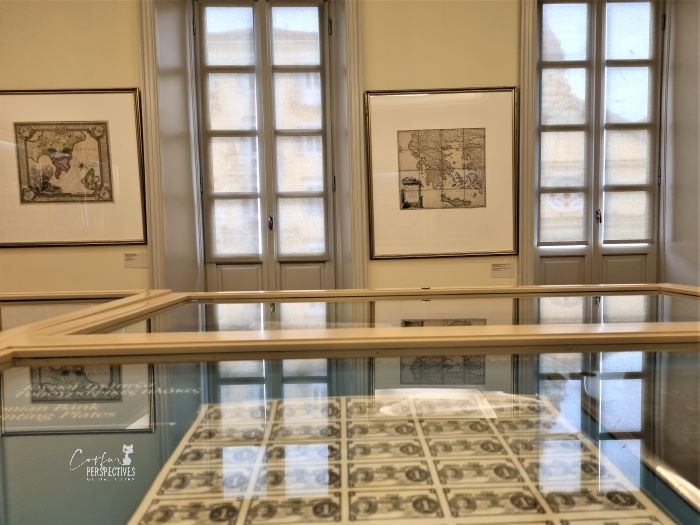 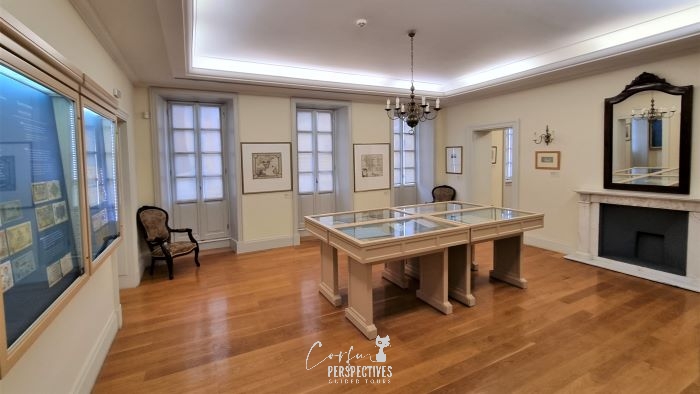 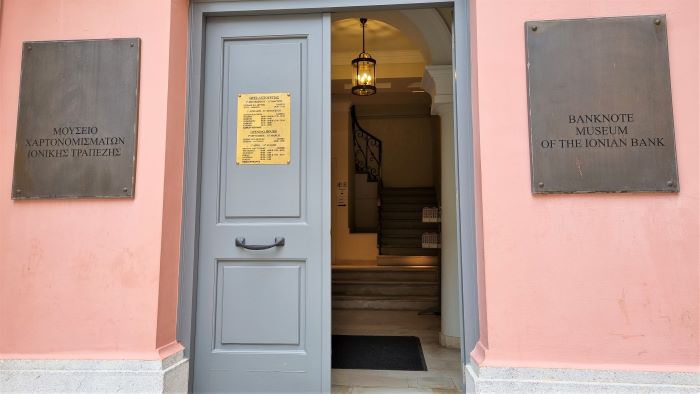 We thank the “Banknote Museum of the Ionian Bank/Alpha Bank, Corfu” for the permission to film the interior of the building and the museum’s collection.